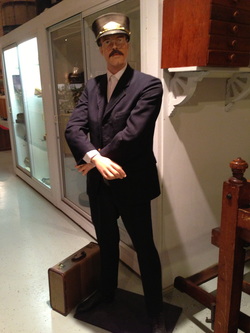 From the time I was a little boy, trains have always been special.  Watching from my front porch the big black Shay engine would slowly roll by.  I loved the thick black smoke pouring out and the smell filling the air.  I knew from that moment, becoming a train conductor was what I wanted to be. I worked my way up from laying track to riding the track.  A brakeman,  Porter, Fireman, and finally a conductor. As a young lad, I would dream about standing beside the sleek train watching all the passengers climb aboard.  I would wonder where they were headed and what business they were in.  I can still hear the train conductor call “all aboard”.  Folks would hurry up their walk towards the train and board just in time as the train pulled away from the station.  “All aboard” became lodged in my memory.  On my first day as the conductor, I met a sweet lady who was traveling to visit a sick sister.  I had to hold up the train so that she could get on.  I knew this would put us behind.  She was attempting to climb up the steps of the train when she felt faint and almost fell.  I moved to catch her before she fell to the ground.  After picking up her handbag, she dropped, I helped her back up the steps.  She thanked me and walked towards the passenger car.