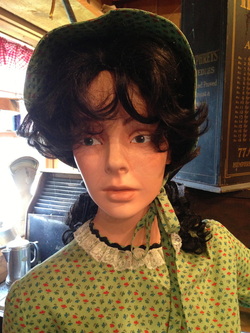 As Camilla grew, I realized that she too shared my love of fancy things.  My dreams of that store bought dress came back.  After several trips down to Perry’s Mercantile, I noticed a new pretty dress hanging on the dress form.  The fall harvest barn dance was coming up soon and I could just see myself dancing away in that dress.  I would stand behind the dress form imaging just how pretty the dress would look on me.   Mr. Perry even noticed it and would always say, “just a few more weeks and you can dance away in that dress. Keep saving your egg money and you will be wearing it in no time.”  Leaving the store for the long walk home, I could hear ma saying” child, your eyes are too big for my purse.  Git that foolish idea out of your head.”  My mother never did understand the reasons I wanted a new store bought dress when I was growing up.  She didn’t know how the other girls made fun of me at during the walk to school each day.  My old tattered feed sack dress was not like the pretty silk dressed that some of them wore.  Ma had to sew patches on parts of the dress if I got it caught on a briar bush or on the fence when I climbed over it.  Little by little, it became a ‘patch work’ dress.  I dried my tears before arriving home each day.  I can still hear them making fun of me.   That new dress would make up for all the pain and tears so I started to figure out just how to get it the next time I went to the store.  What happened next was out of one of those fairy tales you read about.   It began the following week when I just happened to over hear Mary Lou, my neighbor down the road talking about  needing a dress for the barn dance.