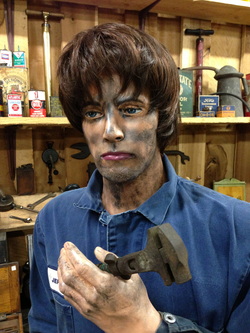 “The trip was long and the wind was nipping at my back as I trudged along the pike.  I was on my way to Waynesburg to visit a sick aunt.  About two miles down the road I heard a frightful sound.  The closer I got the louder the noise became.  As I crossed the ridge, I saw a small child hovering over a little dog.  He was so upset that his words were unintelligible.  As I got closer to the boy I noticed another child hiding in the bushes off the side of the road.  Not sure what to do, I walked over to the child to see if I could help.  His little dog had gotten into an animal trap and had hurt its leg.  They had been walking home from school when it happen. As quick as I could, I opened the trap and freed the little dog. I wrapped it’s paw in a piece of cloth and handed the dog back to the boy.  Both children walked towards home as I continued my trip. Much later I learned that both children had been missing for two days looking for the dog. Had I not come upon them, I don’t know what would have happened to them.
Life is good and as long as the cars keep coming, I will fix them.