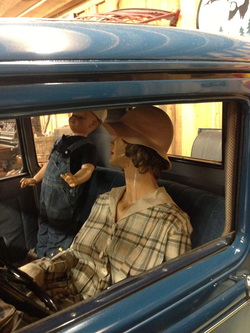 If only my mother could see me now. Sitting behind the wheel of a shiny new automobile was only a dream last year.  Owning an automobile was never anything I would have thought would have happened.  I remember as a little girl, watching Mr. Roberts, owner of Roberts Garage, had the first automobile in town.  Sometimes he would let the kids ride along with him.  It was at that time I fell in love with the idea of having one.  Most women didn't drive a car or even know how to drive.  My daddy taught me how to drive our farm tractor and then the farm truck. By the time I was 14 I was driving around the farm.  I guess it was to be that I would one day drive and own my own car.  After graduating from high school, I took a job at the local Bakery as a secretary.  I saved my money and in time it added up to over four hundred dollars.  It was about that time that Doc. Wilson decided to retire.  He was going to let the younger Doc. Jones take over his practice.  This decision would change my life in a different way than expected.  Just about everybody born over the last 50 years had been birthed, doctored, and in some cases laid to rest. Doc. Wilson would be missed.  It was about that time that I decided to go to school to become a nurse.  Doc. Wilson had always told me that it was "my calling" to help people get better.  To get me started on my journey, he wrote a letter to Dean Smith at St. Mary's Nursing School and get me in the next class.  With the four hundred dollars that I had saved, my first and second year of nursing school would be paid for.  I will never forget that day when I was ready to leave for school.  Doc. Wilson drove up in his Blue Ford Model A that had been the automobile that he used to make house calls.  He stepped out and walked towards me with something in his hand.  It was a small box with a blue ribbon tied around the top.