“Woman of the Backwoods” 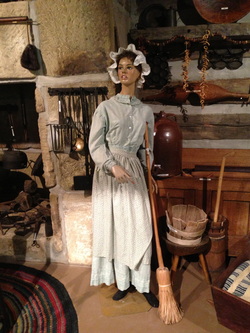 My name is Jency and I live in the backwoods with my husband Jonas, and our family in the remote mountains.  We traveled here to have a chance at a new life and to live our our dream of owning a farm.  I will never say that I was cut out to be a women of the backwoods but that said, I am proud to be one.  When I was a little girl I watched my father till the soil to grow the crops to feed our family.  He worked hard and never complained about anything but always put his family first. The trip across the mountains from Culpepper was hard.  Jonas, his brother Luke, Issy and Willy and I plus our unborn son Abe, we arrived here at Hickory Creek with tools, some food, water, and only what we were wearing. I never dreamed it could be so beautiful.  Our Friend Raccoon had told us about the spot and how the creek would provide water to drink and for crops.  I won’t lie to you that I had my doubts.  Facing the unknown for the first time in my life was very hard. Where would be live? How would we survive the first winter?  Looking back at that first month, it became clear that we were here to stay.  the biggest worry was for food. Jonas and his brother Luke was very busy clearing the land and Raccoon was off hunting for hides.  I had never shot a gun before but decided that it was time to learn.  I remember my father cleaning his rifle when I was a little girl.  Right before Raccoon left on his hunt, I asked him to show me how to load Jonas’s muzzle loader. I know Raccoon was not happy with the idea but he knew that it had to be done.  Later on when Jonas hurt his back and was unable to work, I was glad I took the time to learn.  I cannot say if it was luck or skill that helped me get that first rabbit but I do know how good it tasted.  Now the worry for food was not so great.  It was just one more thing that helped me become that ‘Backwoods Women’.