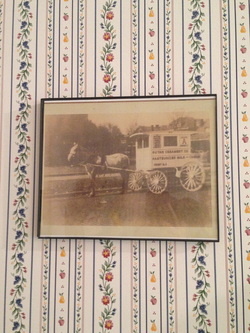 I don’t remember the exact message but I do remember the exact day Mr. Drummond came to the house.  He was the owner of Guyan Creamery, where my husband was working.  I remember  him telling me to sit down because he had some bad news.   bob was unloading empty milk bottles from the back of his wagon and several bottles fell out.  They cut him up pretty bad and he was taken to the local hospital.  Mr. Drummond, his boss wanted to take me to see him.  I don’t really remember what happened next but before I knew it we were pulling up in front of the hospital.  I guess I had been crying the whole way there because mr. Drummond  got out his handkerchief and wiped away my tears and gave me a big hug.  He told me everything was going to be ok and the company would pay all the medical bills.  he then took my hand and we went in.  it seamed like hours before the doctor came out to tell us what was going on.   Bob received several cuts on his legs and arms which required over 50 stitches.  They kept Bob in the hospital over night and mr. Drummond was kind to take me home.  Once again he told me not to worry about the bills and that Bob’s job would always be waiting for him once he recovered.    It took 4 weeks for bob to once again get on his milk wagon to deliver  to his run.  We will all band together as a family and work through this as we always have.