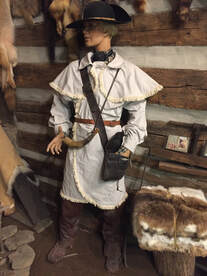 “Quiet boy, listen to the wind. Don’t walk so heavy and watch where you step.”


My name is Simon "Raccoon" Kenton and I hunt and trap on the southern slope of the great Appalachian Mountains. It has been many moons since I have been home, but my nap sack is full of beaver pelts and dried meat. I learned how to hunt and trap at the age of five watching my Uncle Tom as he trapped in the hills. I remember listening to the stories of the great hunt for food and fur. He told of the Cane Fields, as high as trees, and more animals than you could shoot. It was always around the camp fire while we ate jerky and drank apple cider. I didn’t understand at the time, but now as a trapper I don’t want to do anything else. The wind blows and I can hear the buck moving through the woods. It is a pretty good size, and will make a good fur and skin pelt to trade for food and black powder. If I work hard enough, I can get enough pelts for the winter. I can still hear Pappy telling stories about his adventures. One such story comes to mind. It was called Bob Cats, Bears, and Skunks.

"The wind was blowing towards the North and the moon was high in the sky. I had never had the feeling that I had that night before. It was a feeling of excitement as well as fear".