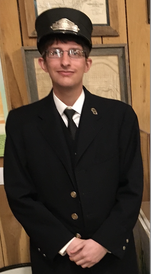 I didn’t see her again until I walked down the aisle to collect the tickets. She had nodded off to sleep so I decided to come back later to collect her ticket.  after about two hours into the trip, I noticed her heading to the supper car.  She seemed upset so I asked her if I could help.  She told me that she had lost her ticket and was worried that I might make her leave before arriving at her destination.  I reassured her that she would not be placed off the train.  That seemed to make her happy.  I then helped her back to her seat where she once again fell asleep.  The gentle rocking of the train allowed her to drift into dream world.  The smile on her face and the peace of her sleep showed me that what ever was wrong with the world, at least she was happy.  Once we arrived at her stop, I helped her off the train.  She thanked me for the help I gave her and I promised to watch for her to return back home. From that moment on, I realized that everyone was important when they board my train.  No matter where they were heading, I needed to make sure they got there. Time is not important, only my passengers.